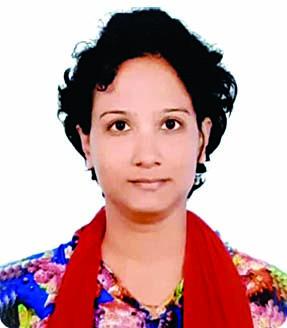 The Bengali nation today welcomes the Pahela Baishakh, the first day of Bengali New Year 1428 amid second wave of Covid-19 infections that are sweeping across the country.

The welcoming, however, will not be held in the traditional rituals in which thousands of triumphant people in colorful native dresses sing and appear in synchronized dances with the rhythmic beat of the traditional drums.

The ceremonial Mongal Shovajatra, a customary colorful rally on the streets organized by students of Dhaka University, will also not be there which usually symbolizes as a unity of the proud Bengali people.

Meanwhile, the nation on Tuesday bade farewell to the outgoing Bengali Year 1427 with a fresh hope that a new sun will rise that will carry off all sorrows, pains, and fears from the country and the world as well.

President M Abdul Hamid and Prime Minister Sheikh Hasina have greeted Bengali people living home and abroad on the occasion of Bangla New Year and wished peace, happiness and prosperity of the people.

Like last year, this year also there will be no outdoor celebration to welcome the Pahela Baishakh as the government has cancelled all public programmes marking the Bengali New Year to avoid mass gatherings as part of its efforts to contain the spread of Covid-19.

Most countries across the world including Bangladesh and their cities, towns and remote areas are already now under lockdown to prevent the spread of Covid-19.

Like many countries, Bangladesh also remains shut from April 14 to 21 as the Covid-19 infection rate has been maintaining an upward trend from March this year.

Except for a few emergency services, all government and private establishments remain closed.

The government has also imposed a ban on all public gatherings and movement in a bid to limit the risks of coronavirus transmission.

As fresh death toll from the Covid-19 continued rising with number of fresh positive cases every day, fear and panic have already gripped the countrymen.

However, the Bengali people staying at home will exchange New Year’s greetings with each other through various social media or over phones.

They also wish peace, happiness and prosperity of the people and the country in the New Year.

The people of Bangladesh believe that the nation starts the first day of Bengali New Year with the hope of overcoming the present crisis, progress of life forgetting all shortcomings and sorrows.

They also wish that the Bengali New Year 1428 would bring happiness, peace and progress for the country.

After the all odds, diseases, frustration and darkness, the Bengali people are confident that fresh lives start to come out again and the capital Dhaka, other metropolitan cities, district towns and other places adorn with their people’s activities.

The nor’wester, known as Kal Boishakhi will also blow away all sorrows, diseases and darkness, the Bengalis believe.

Apart from death anxiety, as coronavirus has also already taken a huge toll on the economy, rendering a large number of people unemployed across the country, frustration and uncertainty gripped the nation.

Since long the nation had been celebrating the Pahela Baishakh upholding the rich cultural values and rituals of the Bangalis.

Everything in the country will become normal and give an impression of freshness as if the once the crisis will go off.

Some historians attribute the Bengali calendar to the 7th century king Shashanka, which was later modified by Mughal emperor Akbar for the purpose of tax collection.

During the Mughal rule, land taxes were collected from Bengali people according to the Islamic Hijri calendar. This calendar was a lunar calendar, and its new year did not coincide with the solar agricultural cycles.

Akbar asked the royal astronomer Fathullah Shirazi to create a new calendar by combining the lunar Islamic calendar and solar Hindu calendar already in use, and this was known as Fasholi shan (harvest calendar).

Pahela Baishakh is one of the most colourful festivals through which the Bangalis bid farewell to the old year and welcome the new year.

But this year, the people have nothing to do but to stay at home in order to protect themselves from the coronavirus infection.

On this occasion, people from all walks of life wear traditional Bengali dresses.

Staying at homes many young women will wear white sarees with red borders and adorn themselves with bangles, flowers, and tips, while men wear white pyjamas and panjabi or kurta.

Marking the day the government earlier in the past all years had drawn up an elaborate programme. But this year all programmes have been cancelled.

The traditional Mongol Shovajatra used to bring out at divisional, district and upazila levels to reach the traditional programme to the grassroots as it has earned the international recognition.

The business communities, especially in the rural areas, also used to open their traditional ‘Halkhata’, new account books. On the day traders also used to offer sweets to customers.

One of the attractive programmes, which is arranged by Chhayanat, a leading cultural organisation of the country at Ramna Batamul at dawn, has also been cancelled.

Besides, Mongol Shovajatra which is brought out from Dhaka University (DU) Fine Arts Faculty premises has also been cancelled.

Improved traditional food will be distributed among jail inmates, patients in hospitals and orphanages on the occasions.