Instructions
First make the dressing. Roughly chop three of the chillies and put them in a blender with the garlic, soy, lime juice, two tablespoons of oil and the sugar, and whizz until well blended.
Put the tomato halves in a large bowl, then lightly squash them with a hand. Pour over the dressing and set aside. Put the julienned courgettes on top of the tomatoes, but don’t mix them in just yet, and sprinkle over the shredded basil.
Now for the peanut breadcrumbs. Heat two tablespoons of oil in a frying pan over a medium heat. While it’s warming up, very finely chop the remaining chilli. When the oil is hot, add the chilli, peanuts, breadcrumbs and salt, stir for around four minutes, until golden brown, then take off the heat.
To assemble the salad, mix the courgettes and basil into the tomatoes, then tip out on to a lipped platter. Scatter the breadcrumbs on top at the last minute, or wait until people have helped themselves and encourage them to sprinkle a small mountain over their own serving.

Instructions
Heat the oven to 220C (200C fan)/425F/gas 7. Put the slices of sweet potato on a baking tray, add a tablespoon of oil and a quarter-teaspoon of salt, and toss to coat. Arrange on the tray in a single layer, then roast for 20 minutes, until just softening in the middle. Meanwhile, make the tomato sauce. Put the passata, sun-dried tomato paste, chilli powder, garlic and half a teaspoon of salt in a blender, then blitz smooth. Taste and adjust the seasoning as necessary.

For the white sauce, heat the miso in a saucepan, slowly whisk in the milk, bring to a boil, then turn off the heat. Put the cornflour in a small bowl, stir in four tablespoons of the hot milk mixture to make a thin paste, then slowly whisk this back into the milk pan. Pop the pan back on a low heat for a few minutes, stirring until the sauce thickens to the consistency of custard, then season with a quarter-teaspoon of salt and turn off the heat.

Scatter the breadcrumbs over the top and bake for 45-50 minutes, until the pasta is tender and the top bubbling and golden brown. Leave to rest for 10 minutes, then serve hot, perhaps with a green salad alongside. 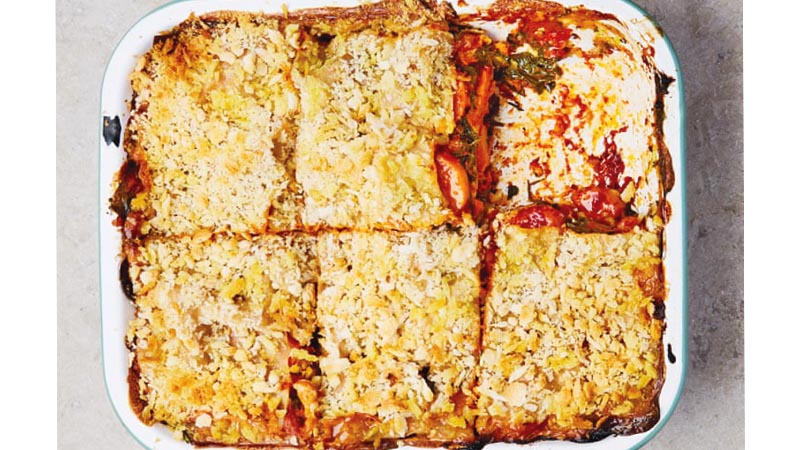 Power tariff will not increase in Delhi for 5 years: Minister

Tesla’s solar factory is exporting most of its cells