In an unexpected discovery, astronomers have spotted a black hole in the Milky Way galaxy that's so large, it defies existing models of how stars and galaxies evolve. The black hole in question, which researchers have dubbed 'LB-1', is roughly 15,000 light-years from Earth, and has a mass that's 70 times that of our Sun, claims the study published in Nature.

The Milky Way is thought to contain stellar black holes that number around 100 million. And LB-1 is twice as large as the largest stellar-mass black hole that scientists imagined possible, according to lead researcher and astronomer Jifeng Liu from the National Astronomical Observatory of China.

"Black holes of such mass should not even exist in our galaxy, according to most of the current models of stellar evolution," Liu said in a statement. "LB-1 is twice as massive as what we thought possible. Now theorists will have to take up the challenge of explaining its formation." An illustration of the LB-1 black hole So far, researchers have arrived at two distinct kinds of black holes. The more common ones are stellar black holes, which can be up to 20 times as massive as our Sun (the oddity in question is 70x the mass of our Sun). These can form when the core of a massive star collapses in on itself.

The second kind of black hole, supermassive black holes, are at least a million times bigger than the Sun. Their origins? Unknown. Researchers think that the typical star in the Milky Way will shed most of their gas through stellar wind — naturally preventing the formation of a black hole as massive as LB-1.

"The abundance of black holes and the mechanisms by which they form" remains something astronomers today are grappling with, David Reitze, a physicist at the California Institute of Technology not involved in the discovery, told AFP.
"LB-1's large mass falls into a range known as the 'pair-instability gap', where supernovae should not have produced it," Reitze said. "That means [LB-1] is a new kind of black hole, formed by another physical mechanism!"

Liu and his colleagues made their observations using the Large Sky Area Multi-Object Fiber Spectroscopic Telescope (LAMOST) in China, seeking out "wobbly stars" that might point to a nearby black hole (which otherwise appears invisible).
The complex anatomy of a black hole. Pictured is an impression of a rapidly-spinning supermassive black hole with a thin disc of rotating material like leftovers of a Sun-like star that was ripped apart by the black hole's tidal forces. Image: ESO
LAMOST pointed them to a giant blue star. It took some follow-up observations with the more powerful Gran Telescopio Canarias in Spain and the Keck Observatory in USA to really uncover what they had found.

The star they spotted was around 35 million years old, clocking in at around eight times the mass of the Sun. It was also orbiting LB-1 every 79 days on what the researchers describe as a "surprisingly circular" orbit. This circular orbit of LB-1's companion star is puzzling because there's no scenario that the scientists could imagine that fits both — the formation of the black hole and the existence of a companion star that's orbiting it in a circular orbit.

If LB-1 formed when two black holes collided, after which it captured a star, the circular orbit of its companion would be highly unlikely. What's expected is a very eccentric, elliptical orbit. Sure, time could smooth this orbit out and turn it "more circular", but that would take longer than the star's age (so... over 35 million years of time — again, an unlikely possibility, per the study). A possibility that researchers are pursuing is that LB-1 is a "fallback supernova" — material was ejected from the dying star at some point, after which it fell immediately back into the star, directly producing a black hole.

While this is a little-understood, theoretical possibility, scientists haven't found any direct evidence for black holes formed this way till date. An undated handout image of the massive star Eta Carinae in our Milky Way galaxy that experts believe might explode in a supernova at any time, based on data from the Hubble Space Telescope. Image; NASA "This discovery forces us to re-examine our models of how stellar-mass black holes form," Reitze said. "This remarkable result along with the LIGO-Virgo detections of binary black hole collisions during the past four years really points towards a renaissance in our understanding of black hole astrophysics." 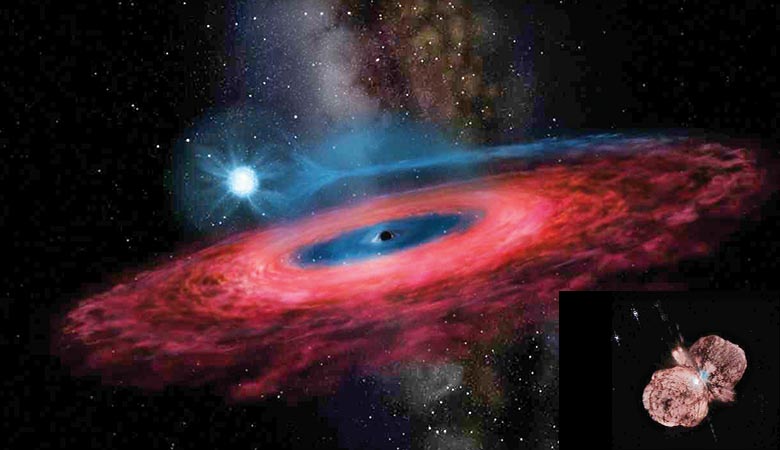 An illustration of the LB-1 black hole, An undated handout image of the massive star Eta Carinae in our Milky Way galaxy that experts believe might explode in a supernova at any time, based on data from the Hubble Space Telescope. Image; NASA.