After various speculations and spy shots of the Ducati Panigale Superleggera V4 doing rounds on the internet, the Italian brand has now officially unveiled this ultra-exclusive motorcycle. Notably, it is the most powerful production Ducati ever built at its Borgo Panigale factory in Italy.

In essence, the Superleggera is the higher-spec version of the Panigale V4 R model. Talking about its astounding performance numbers, this hooligan makes 224bhp from its 998cc, V4, Desmosedici Stradale motor. With the fitment of the race kit comprising of track-specific Akrapovic exhaust, the power can be further bumped up to 234bhp! 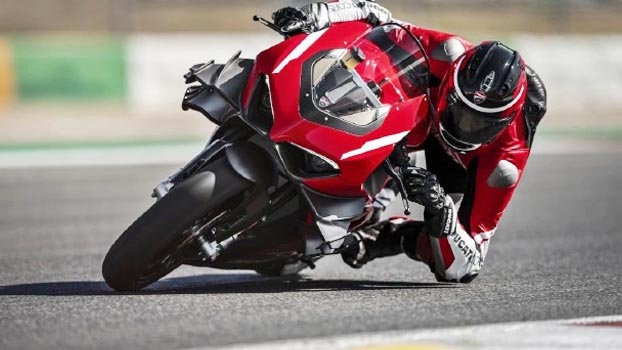 Besides the insane performance, the Superleggera's 152kgs dry weight means it has an incredible power-to-weight ratio as well. Contributing to this weight saving is extensive use of carbon-fibre, magnesium, aluminum and titanium components. Notably, the swingarm, frame and fairing of the motorcycle are fully carbon-fibre.

The fairing also sports a pair of carbon-fibre bi-plane winglets which lend it much more downforce as compared to the V4 R and V4 S versions of the Panigale.

Ducati has also loaded the Superleggera with electronic gizmos to the brim. It gets a six-axis IMU set up which facilitates cornering ABS, traction control, launch control, slide control, wheelie control, up and down quickshifter and engine braking control. Furthermore, it comes with three pre-set and five customisable riding modes.

Completing the highly premium package are top-spec Ohlin suspension and Brembo brakes with Stylema calipers. As we said, the Panigale V4 Superleggera is ultra-exclusive as Ducati will produce only 500 units with each costing £85,000. Deliveries of the sportsbike will commence by June this year.