In a mouth watering fashion Cypriot delectable dishes have been prepared at Royal Park Residence Hotel in Banani of the capital to celebrate the three-day Cyprus Food Festival lasting from December 7-9. The occasion was graced by the Sri Lankan High Commissioner HE Crisanthe De Silva and the Maldives High Commissioner Her Excellency Aishath Shaan Shakir. They tasted the Cypriot dishes and expressed much appreciation to the hospitality of the hotel.

Regarding the food, Crisanthe De Silva said, “Food is what brings different people together under one roof. Although we are frequent patrons here, still this is the first time I have tries Cypriot cuisines. Sri Lankan food contains many spices but the soothing effect and the mild taste which Cypriot dishes have is a suitable change from the blend of rich spices that we are used to.”

On the other hand Her Excellency Aishath Shaan Shakir also expressed similar thoughts about the food festival, “I am a regular here. Every Friday they have Sri Lankan special menu but today (Friday) they prepared something even more special. The hospitality is over the roof here as always.”

The CEO of the hotel, Keerthi Weragoda, warmly welcomes all the guests to join the unique Food Festival of Cyprus. The master chef behind the Cypriot cuisines is Executive Chef of Royal Park Residence, Chef Rajeeva Mendis who presented his culinary excellence of Cypriot cuisine to the guests. Chef Rajeeva and his team, mastered in Cyprus cuisine, with four years of preparing Cypriot dishes under his belt captured the guests through the exotic flavors of Cyprus. Cost for one was BDT 1800 net.

Cyprus is close to the Middle East and their cuisine has great impact from Greece and Turkey. Ingredients like parsley, garlic and yoghurts are the essentials in most of the dishes. Hot spices are not used but Italian herbs such as mint, cardamom, arugula and estragon are extremely popular in the foods. Lamb, beef and rabbit meat are most frequently used for their meat dishes. Tuna and sword fish are Cypriots’ favorite fish.

The cuisine is mostly famous for their dishes like Kleftiko, a dish made with lamb legs. Souvla, another popular meat dish which looks like Russian shashlik. Stifado, beef stew in tomato sauce (sometimes with a little bit of red wine) with onion, garlic and spices. Kotopoulo, chicken with small pieces of taro. This cuisine is also dependent on some cheese and sauces. Halloumi is famous Cypriot cheese made from a mixture of goats and sheep’s milk. The structure of this white salty cheese is like mozzarella. Tzatziki, a traditional sauce made from yoghurt, fresh cucumber and garlic is used as dipping for many dishes. Dolmades are a very popular starter in Cyprus. It is grape leaves stuffed with rice and meat. Taramosalata, made from salted and smoked roe of the cod, mixed with bread soaked in milk, mashed potatoes and olive oil. 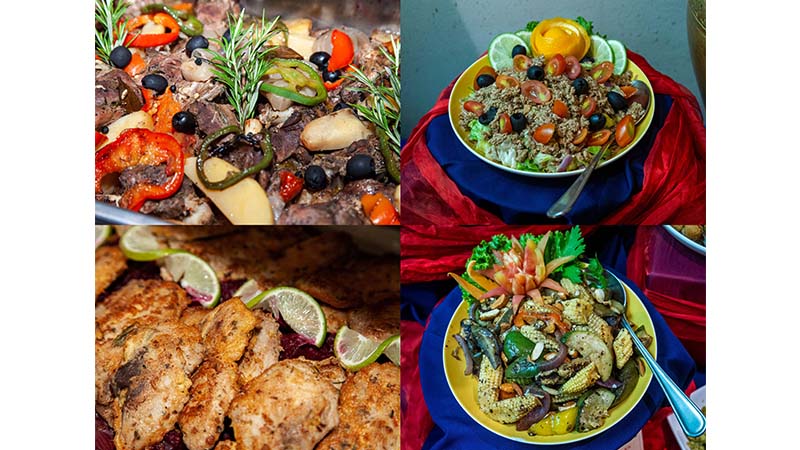