Given the size of the high-tech new Daxing International Airport in Beijing, which opened in late September, it's only fitting that the airport's only in-terminal hotel is equally as grand.

The 215-key establishment, which opened its doors to guests on September 25, spans two floors and is more than 9,000 square meters (96,875 square feet) in size -- a relatively small chunk of the starfish-shaped airport terminal, which is a whopping 700,000 square meters.

Located in the Northwest Pier of Daxing, Aerotel Beijing is five minutes away from the nearest domestic check-in counters and a 10-minute walk from international ones.

The design is relatively modest -- think minimalist furnishings and neutral colors. Instead, the hotel focuses on providing what's needed the most among travelers -- comfortable bedding and powerful showers.

Guests can rent rooms in blocks of three, six, nine or 12 hours -- so there's no need to pay a day rate. 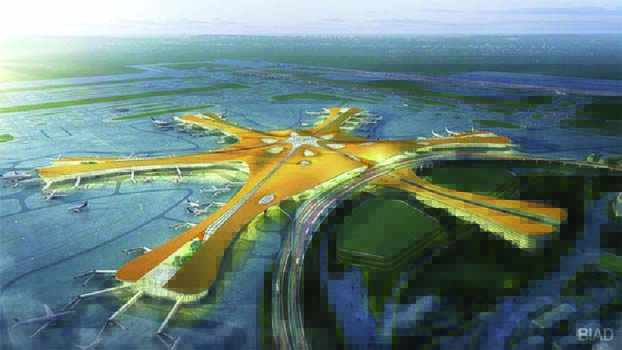 An Arial view of new Daxing International Airport in Beijing.

"We created Aerotel to take care of travelers needing a space to rest right at the terminal with no constraint on check-in time," said Song Hoi-see, founder and CEO of Plaza Premium Group, in a statement.

There's also a gym, inside a birdcage-like room, and a game room.

The group's flagship property, Aerotel Beijing is also the first hotel in the group to have two meeting rooms and a multifunctional VIP room that can host up to 36 guests.

After the opening of the first Aerotel in Singapore Changi Airport in 2016, the group -- better known for building airport lounges -- has expanded and now operates 10 properties around the world.

It's all part of a greater trend in aviation. Airport hotels -- either in-terminal or nearby properties -- have become more popular and more awe-inspiring in recent years.

JFK Airport, for instance, recently opened the long-awaited TWA hotel, with 512 rooms and a retro-aviation theme.

Meanwhile, Paradise City outside Incheon International Airport in South Korea is a $2 billion resort featuring artworks from Damien Hirst and Yayoi Kusama, a nighttime theme park and a casino.

EIB plans to cut all funding for fossil fuel