Coachbuilding is something of a lost art today, but in a modern world searching for unique, refreshing ways of spending money, it seems ripe for a comeback. Bentley dips its toes back in the coachbuilding waters, tasking its Mulliner division with custom-building vehicle bodies for truly discerning buyers. The new Bacalar is the first fruit of Mulliner's labor, a roofless barchetta with concept-inspired looks and W12 power. The Bacalar is billed as Bentley's "most exclusive car of the modern era," and Mulliner will build only 12 before turning its attention to other bespoke-bodied creations.

Mulliner isn't starting from scratch so much as returning to the business on which it built its name. As Bentley explains, the family company got its start all the way back in the 1500s but rose to prominence in the late 1700s when it began coachbuilding carriages for the British Royal Mail service. By the late 19th century, Mulliner turned its attention away from horse-drawn carriages and toward motor car bodies, raising its profile alongside the growth of the automobile. In 1959, Rolls-Royce, Bentley's owner at the time, purchased Mulliner and brought its coachbuilding in-house, but the once great art of custom body building faded out of fashion the following decade.

Now a part of the VW-owned Bentley, Mulliner has been handling personalization and luxury limited editions, more recently adding classic continuations and restorations to its responsibilities. The introduction of the Bacalar marks its return to "Coachbuilding," a new division that joins "Classic" and "Collections" in Mulliner's expanded three-part structure.

The Bacalar welcomes in the new era of Bentley Mulliner coachbuilding as a roofless roadster pulling inspiration from last year's celebratory EXP 100 GT. That concept-to-custom relationship becomes clear the minute you lock eyes with the distinctive headlamps that pair familiar Bentley ovals with thin light strips stretching out to the fenders. The grille and hood have been sized down to more practical dimensions, with aerodynamic bodywork like hood vents and a front splitter creating a more aggressive aesthetic. 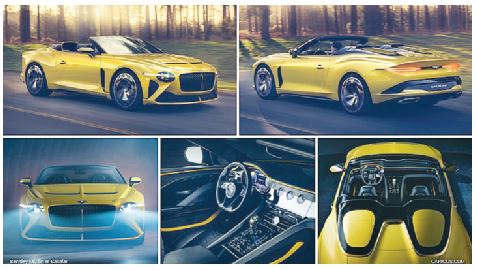 Bentley promises that the aluminum-and-carbon fiber Bacalar does not share a single body panel with any other vehicle in its lineup, relying only on the Continental GT's door handles. The barchetta doesn't have the visual length or athleticism of the EXP 100 GT, but its fenders are still quite powerful, connected by strongly defined character lines running across the two doors. The rear is particularly muscular thanks to a rear track widened by 22 mm (0.9 in). Each customer will be able to personalize the look of the individual Bacalar exterior with a series of exclusive paints, design themes and exterior treatments.

The rolling chassis upon which Mulliner sculpts the new Bacalar is that of the Continental GT, bringing along a 6.0-liter twin-turbo W12 TSI engine tuned up to 650 hp and a dual-clutch eight-speed transmission. The rear-biased active all-wheel drive keeps the Bacalar in rear-wheel drive as much as possible, sending torque to the front axle when needed. The 48-volt dynamic ride system sharpens response and handling while also keeping the ride as smooth and comfortable as one would expect from a coachbuilt Bentley.

Mulliner may just be getting back into the custom body building business, but it has plenty of recent experience creating special ambiances inside individual car cabins. It starts this one with the idea of a wraparound design that instills some of the drama of a full-blown split-seater like the all-new Aston Martin V12 Speedster without completely separating the seats into individual pods. The two seats are split by a strong, full-length center tunnel, and behind each is a cocoon-like luggage compartment sized to hold bespoke Schedoni luggage.

When the driver sits down, he or she wraps fingers around a specially designed D-shaped steering wheel. Upon start-up, the rotating display flips over from the classic look of analog gauges against river wood to the modern utility of high-definition touchscreen. The clock face wears individual 1 of 12 badging.

We shudder to think how the Earth might suffer if ultra-premium marques don't think sustainably when coachbuilding W12 roadsters destined to squeeze between dozens of other six- and seven-figure cars with horrendous fuel economy numbers in the bunker-like garages of the rich and richer. So it's relieving to see Bentley blazing a brave trail by loading the Bacalar interior with sustainable buzzwords like "5,000-year-old sustainable river wood," "natural wool cloth," "rice husk ash" paint content and "certified carbon-neutral factory." Eco catastrophe averted.

Bentley doesn't humor the plebes with a look at how much this custom-bodied Continental GT will cost, but unsurprisingly it's a moot point because all 12 examples have already been spoken for.

Travelling to Bhutan to get expensive for Bangladeshi

Greenhouse gas emissions from diesel vehicles cancelled out cuts from RE