There’s so much to love about midsize SUVs with three rows of seating. They have a rugged coolness that no minivan could ever match, yet they have just about as many seats. You’ll have to squeeze a little more to fit everyone, but once you’re inside, these SUVs offer plenty of standard convenience features and driver-assistance aids along with a few luxurious extras you never knew you needed. Driving a modern 3-row midsize SUV can be downright enjoyable, too. They come with powerful engines yet still return reasonable fuel mileage.

In this comparison, we gathered similarly priced versions of the 2020 Ford Explorer, Honda Pilot, Hyundai Palisade and Kia Telluride, and drove them back-to-back on our test loop. We wanted to include the redesigned 2020 Toyota Highlander as well, but couldn’t source one, so expect a rematch in a few months.

Each of these 3-row midsize SUVs has its own appeal and can ferry a family with ease. But the 2020 Kia Telluride does everything a little better than the rest, and indeed, the KBB editors have named it our Best Buy of 2020 in this class. Read on to get our take on these 3-row crossover SUVs.

Redesigned for 2020, the Ford Explorer offers a new twist on the 3-row midsize SUV formula. It’s still a crossover SUV, but it uses rear-wheel-drive (RWD) architecture instead of a front-wheel-drive (FWD) setup like the other SUVs in this test. There’s no obvious difference in how it drives, but editors raved over the acceleration from our Explorer test vehicle’s base turbocharged 2.3-liter 4-cylinder engine, which is rated at an impressive 300 horsepower.

The Ford also has the highest tow rating in this group: 5,300 pounds on properly equipped 4-cylinder models (5,600 with the available V6) versus 5,000 on the other SUVs. Fuel economy is also tops, as the rear-drive 4-cylinder 2020 Explorer has a 24-mpg combined EPA rating (23 combined on all-wheel-drive [AWD] models).

Unfortunately, the Explorer’s 10-speed automatic transmission makes its presence too obvious in normal driving, as shifts are less than seamless. Inside, the Ford has too much hard plastic, especially considering it was the most expensive vehicle in this test. Editors also thought it felt smaller, even though its total passenger volume is similar to the other SUVs. A high floor results in a cramped 3rd-row seat, and whereas the others can accommodate up to eight passengers, the 2020 Ford Explorer tops out at seven (and the V6 and hybrid versions only seat six). 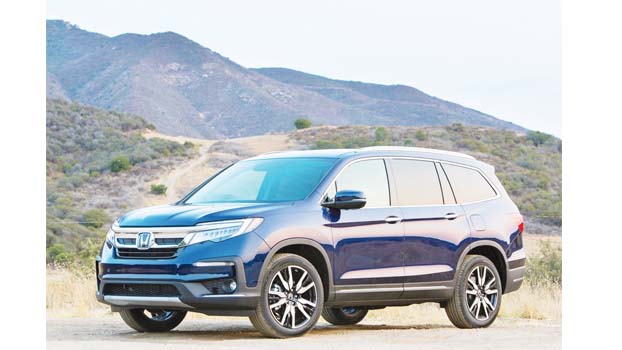 Only a year ago, the Honda Pilot was our favorite 3-row midsize SUV and it still has a lot of appeal for everyday family use. It’s a spacious vehicle with simple controls and lots of useful storage nooks and bins. And while all the vehicles in this group have driver-assistance aids like lane-keeping assist and a forward-collision system (with automated braking), the Pilot goes one better by making blind-spot monitoring standard on all trim levels as well.

All 2020 Honda Pilots come with a 280-horsepower 3.5-liter V6 engine paired with either a 6-speed automatic transmission or a 9-speed automatic as in our Black Edition test vehicle. With the latter combination, the Honda pulls strongly when accelerating up to highway speeds. But the Pilot’s V6 was noisier than we remembered, likely a credit to the newer, quieter competition in this class. Fuel economy is EPA-rated at 22-mpg combined on our AWD test vehicle (front-drive versions rate 23 mpg with the 9-speed auto, while the 6-speed auto Pilots have slightly lower mpg ratings).

Editors didn’t care for the Honda’s soft brake pedal feel. And several commented on the Pilot’s outdated infotainment interface. Like the others, it includes Android Auto and Apple CarPlay integration, but the touch screen is noticeably lower in resolution. And it’s only eight inches across. You can get a 10-inch screen in the other SUVs. 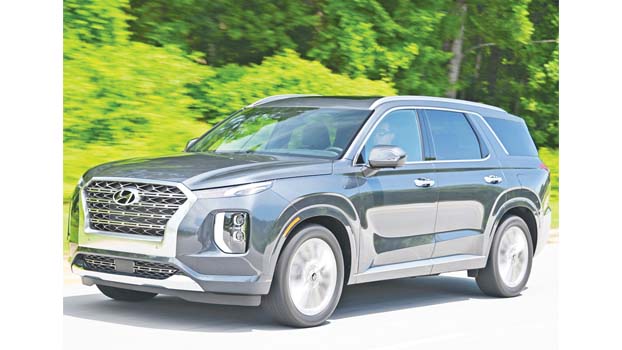 Brand-new for 2020, the Hyundai Palisade is already a class leader and strikes us as an even better version of the Honda Pilot. It’s well equipped in the usual Hyundai way. Our top-of-the-line Limited AWD test vehicle cost significantly less than both the Explorer and Pilot but included truly elegant Nappa leather upholstery, a surround-view camera (also available in the Ford) and a nifty blind-spot camera display in the instrument panel (also in the Kia). And it has a terrific warranty, including 10-year/100,000-mile powertrain coverage. But the 2020 Hyundai Palisade is also exceptionally comfortable, quiet and refined among 3-row midsize SUVs.

“It is deliciously quiet and capable of making any rough road a Sunday drive,” one KBB editor wrote. “The 8-speed automatic transmission silks up and down through the gears effortlessly.”

That transmission is the companion to the Palisade’s standard 291-horsepower 3.8-liter V6 engine and it provides strong performance. Fuel economy is EPA-rated at 21-mpg combined with AWD (22 mpg with front-drive).

Complaints about the Hyundai Palisade were few, but no one liked the push-button gear selection for the transmission. We also took issue with some of the interior materials. All are high-quality, but it’s a “mélange of textures,” said one editor, which results in an almost chaotic ambiance in the otherwise luxurious cabin. 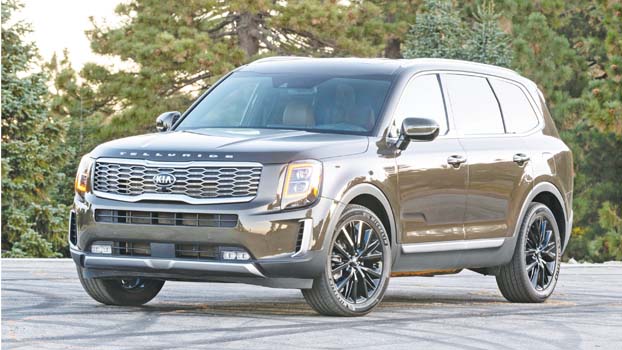 And so we come to our winner, the Kia Telluride. Underneath its handsome bodywork, it’s the same vehicle as the Hyundai Palisade, but the execution of the details is just different enough that it’s our unanimous pick in this class.

Interior furnishings in the big Kia are just as nice as those in the Hyundai, but the graining of the surfaces is smoother and less adventurous. We also like having a conventional console shifter for the 8-speed automatic. One taller editor also reported that it was easier to see out of the Telluride than the Palisade. Unlike the Hyundai and Ford, the Kia can’t be equipped with power-folding 3rd-row seats, but we didn’t miss them. Cargo capacity is very similar among all four SUVs, but the 2020 Kia Telluride has the most capacity behind its third row at 20 cubic feet.

On the road, we were happiest in the Telluride. The 3.8-liter V6 engine has plenty of power as in the Hyundai, but to our ears, the Kia is slightly quieter. “It also has a great ride,” one KBB editor wrote. “Its balance is difficult to upset.”

Priced just under $47,000, our loaded Telluride SX AWD test vehicle undercut all the other SUVs in this test. Looking ahead, we expect that its resale value will be only slightly lower than the Pilot’s. And based on KBB’s 5-Year Cost to Own calculations, the Kia is likely to have lower total ownership costs than any of the other SUVs in this test.

China will not cut new energy vehicle subsidies in July