Teachers of Chittagong University staged demonstration on the campus on Sunday protesting vandalization of an under-construction sculpture of the Father of the Nation Bangabandhu Sheikh Mujibur Rahman in Kustia.

The CU teachers held a sit-in-programme on the Bangabandhu premises of the university in the morning. 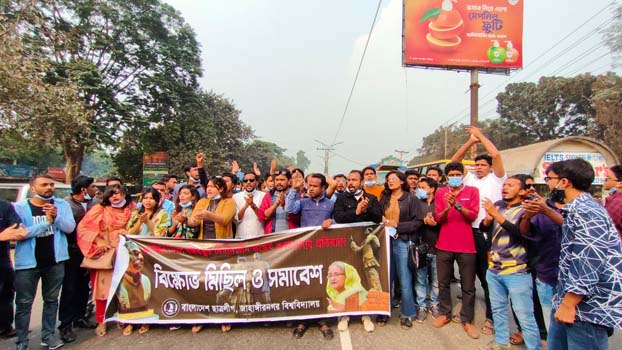 Bangladesh Chhatra League brought out a procession on Jahangirnagar University campus on Sunday protesting vandalism of Bangabandhu’s sculpture in Kushtia.

Speakers at the demonstration demanded exemplary punishment of those involved in the incident.  M Mainul Hossain Rajon, deputy office secretary of JU unit of BCL, said that the vandals are none but anti-liberation forces who want to eliminate the glorious history and culture of the nation.

Some Islamic parties like Hefazat-e-Islam want to  turn the country into Afghanistan. Today they stand against sculpture, we afraid,  tomorrow they will talk about women's education.

Organising secretary of JU BCL, Aklema Akter Esha said that we are living in a secular country but some zealotry wants to make the country unstable.

By-polls to Faridpur-2 constituency on Nov 5

Bangladesh likely to get $600m budgetary support from Jica