Valentine’s Day on the small screen

On the occasion of  Valentine’s Day, various channels broadcast special dramas and telefilms every year. This year is no exception. Bangladesh Post presents a special feature on selected romantic dramas and telefilms. Written by Synthia Kainath Nur.

Popular actress and vocalist Ishita acted in a special drama for Valentine’s Day after a year. Viewers will see her in ‘Keno’ written by Asif Iqbal and directed by Mahmudur Rahman Hime which will be released on a YouTube channel. Since it is a Valentine’s Day special, the story is about love, meaning ‘Keno’ is a romantic drama.

Regarding the acting in the play, Ishita said, ‘I have a special interest in acting. For me, it is very important that the story and character are good. Hopefully everyone will like the drama.’

Telefilm ‘Borno Porichoy’ is written by Aurangzeb and directed by Tuhin Hossain. Naeem and Jessia have paired up for the telefilm. Mili Bashar, Farhad Milan, Ashraful Ashish and many more have acted in it. It will be aired on Channel i this afternoon at three o'clock.

Meanwhile, the drama 'Beautiful Liar' will be aired on BanglaVision tonight at 6:20 pm. Afnan Shubho wrote the script and it is directed by Md Mehedi Hasan Johnny. Apurba, Tanzin Tisha and others have acted in it.

On the occasion of Valentine’s Day, director Mahmudur Rahman Hime produced the drama 'Rouder Opekkha' with Mosharraf Karim and Tasnia Farin. It is written by Nazia Hasan Aditi. Regarding acting in the drama, Mosharraf Karim said, ‘The story is a little different. Hime really wanted to portray the story in the best way. Among the newcomers Farin is doing well.’ 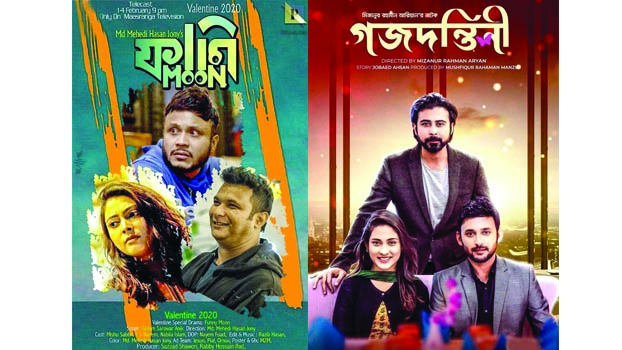 Sagor Jahan’s drama ‘Matir Bank-e Bhalobasha’ will be aired on Ekushey TV at 11:30 pm. Mosharraf Karim and Snighdha Momin have acted in it.  Mahmudur Rahman Hime has directed 'Memories' with the pairing of Nisho-Mehazabien. The drama will be aired on NTV today at 2:30 pm on the occasion of Valentine’s Day.

Praful Roy Chowdhury has directed 'Untold Love Story' with the story idea from Ziaul Faruq Apurba. Apurba Rubel wrote the screenplay. It stars Apurba and Tanjin Tisha. The drama will be aired on BanglaVision tonight at 9:30 pm. The drama ‘Nona Joler Bhalobasha’ starring Sajal, Sarika, Inekhab Dinar and Abul Hayat will be aired on 9:20 pm on RTV. The drama is directed by Golam Muktadir.