She was known as Saint of the Gutters

Mother Teresa was a Roman Catholic nun who started the Missionaries of Charity and won the Nobel Peace Prize in 1979 for her work with people. For over forty years, she took care of needs of those without money, those who were sick, those without parents, and those dying in Calcutta (Kolkata), guided in part by the ideals of Saint Francis of Assisi. As the Missionaries of Charity grew under Mother's leadership, they expanded their ministry to other countries. By the 1970s she had become internationally well known as an advocate for the poor and helpless. 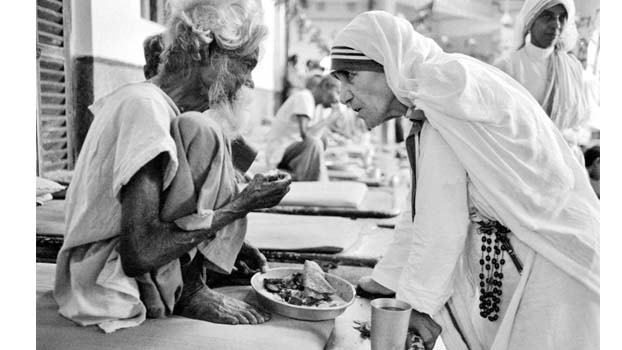 Mother Teresa of Calcutta was the founder of the Missionaries of Charity, an order of 3,000 nuns and 400 brothers in 87 countries, tending to the poor and destitute in the slums of 160 cities, running 81 homes for the dying and treating six million sick people annually in 670 mobile clinics.

Mother Teresa's order has been called “a missionary movement without parallel” and “a missionary multinational”. She was widely spoken of during her lifetime as a saint. She captured the imagination and the admiration of the world at large by her extraordinary dedication to, and love for, the poor, especially the poor of Calcutta; she did not shirk from embracing the leprous, the repellently diseased, the dying destitute. Pope John Paul II called her the Catholic Church's most precious institution, and even the New York Times bestowed on Mother Teresa the agnostic accolade of being ‘a secular saint’- in addition, presumably, to being a holy one.

Mother Teresa was born Agnes Gonxha (Flower Bud) Bojaxhiu, in Skopje, Macedonia, in 1910. Her family was Albanian - one of the Albanian minority which, then, as now, was in cultural conflict with its ruling Serbs. Her father, Nikola, was a successful merchant and an Albanian nationalist, but he died when she was nine. The family was comfortably off by the standards of the time, but Agnes nevertheless knew disadvantages. She was the third child of the family, not the usual position to be favoured. She had a club foot. Her parents were in a cultural and religious minority: devout Roman Catholics, although only about 10 per cent of the ethnic Albanians are such. And, with a widowed mother, she was to grow up in a single-parent family.

Yet the mother, Drana, was apparently a strong woman, of a charitable disposition, who more than once took unfortunate individuals into her own home. All her life, Mother Teresa was to take very seriously the passage from the Scriptures in which Jesus said: “I was hungry and you gave me to eat; I was thirsty and you gave me to drink; I was homeless and you took me in . . .” This was her mother's example.

Possibly her disfigurement turned Agnes away from thoughts of marriage; but in any case her vocation came to her, she claimed, when she was 12. At school, she became aware of the work of Yugoslav Jesuits in India; she also heard that the Irish Order of Loreto Sisters worked in India as missionaries, and at the age of 19 she joined them. She was brought initially to Rathfarnham, County Dublin, to enter the novitiate and to learn English. In 1929 she went to India.

The Loreto Sisters had been in India since the 1840s. Within the context of their own time, these nuns were remarkably progressive. They were dedicated to the education of women in times and places where education for women was not particularly valued, and they encouraged personal gifts of leadership. Mother Teresa took her name in religion from Therese of Lisieux, rather than Teresa of Avila: “the little Therese, not the big one”, as she put it - enjoyed teaching girls in Darjeeling and later in the Loreto school in Calcutta. Her special subject was, significantly, geography. The time would come when she would visit most of the places that for long were just textbook marks on the map. Agnes was professed, fully, in her vows in Darjeeling on 24 May 1937.

By all accounts, she was content in her teaching work at the time, although it was a sheltered enough life and, in the nature of things, the girls that she taught were from the better-off strata of society. It was on a train between Darjeeling and Calcutta, on 10 September 1946, that Agnes believed she heard the voice of God telling her to found an order for the poor, the dying and the destitute.

Bengal, at the time, was in the turbulent grip of refugee influx, and of famine, partly due to the imminent partition of India. There were some initial difficulties for Mother Teresa: she had no money, no accommodation, and no backing from the church establishment. And there was the question of her being released from her Loreto vows. Yet Mother Teresa's extraordinary will-power, and her equally strong faith that God would provide, soon triumphed.

A benefactor appeared in the shape of Michael Gomes, an Indian Catholic businessman who provided modest hospitality and background help; the Loreto nuns gracefully released her from, as it were, her contract; and the Church was persuaded of the authenticity of this new calling. And so, on 7 October 1950, the new Congregation of the Missionaries of Charity was approved and instituted in Calcutta, and from there spread throughout India.

Among its controversial characteristics at the time was the order's habit; a white cotton sari fringed with a simple blue band. Some people looked askance at Catholic nuns wearing what was in effect a Hindu garment, but, whether by luck, inspiration or instinct, Mother Teresa hit just the right note with this simple attire: it was practical, and it was ethnic, and, when Mother Teresa finally became a superstar, ethnicity was all the rage.

For over 10 years, the order's work was confined to India. Catholic missions are not permitted to expand overseas until they are at least 10 years old - a prudent restraint against running before one can walk. So, in 1965, the order set up a branch in Venezuela, and after that, international expansion continued at a breathtaking pace: Italy, Australia, London (in 1971), Israel, Ethiopia, the Yemen Arab Republic, Beirut, Zagreb, St Louis (Missouri), Belgium, Portugal, Kowloon, Warsaw, Bolivia, East Berlin, Tokyo; through the late Seventies and Eighties it grew faster than Laura Ashley. In 1975, the allied Brothers' Missionaries of Charity were launched in Los Angeles, and since the start there had also been a lay group of supporters, the Co-Workers of Mother Teresa, which attracted altruistic individuals such as Daphne Rae, the wife of the former Headmaster of Westminster School.

Mother Teresa's work was, of course, admired within the Church, and within India, from the start. She became an Indian citizen in 1948, and since then enjoyed unstinting sup- port from all Indian governments, including the Marxist administration of West Bengal.

But her international reputation was perhaps established by Malcolm Muggeridge's BBC film, transmitted in 1970, entitled Something Beautiful for God. This startling witness of Mother Teresa's work evoked an immediate public response and made her, in effect, an international star. Before long, she was sharing a television studio with David Frost, Norman Mailer, Barbara Walters; it was almost as though she, too, was touched by the showbiz element that television confers on all its identifiable personalities. She accepted this with aplomb, but without personal vanity; in effect, she used it for evangelisation.

Later, her passionate advocate Muggeridge became a Roman Catholic under her example. “Words cannot convey how beholden I am to her,” he wrote. “She has given me a whole new vision of what being a Christian means: of the amazing power of love, and how, in one dedicated soul, it can burgeon to cover the world.”

She was, certainly, a saintly kind of person, and must surely be a candidate for eventual canonisation. Yet saints can be awkward individuals; they are strong-minded, disconcerting, ambitious, even wilful. Mother Teresa displayed all the singleness of purpose and ambition - ambition in the service of God, and of others, of course - of the saint. She mixed terrific self- discipline and dedication with faith and trust in God. “You have to do it [your purpose] as if everything depends on you - but leave the rest to God,” she would say.

She believed in the power of prayer and love, but also in employing every human agency that was useful, too. When her mother, Drana, was dying in 1972, the family tried hard to get the old lady out of what was then the hard-line Communist regime of Albania, to be with her daughter Agnes at the end.

Mother Teresa prayed ceaselessly: but she also stormed the Albanian Embassy in Rome and persuaded a list of prominent people, including Indira Gandhi and U Thant, to intervene with the Albanian government for her. It was all to no avail. Enver Hoxha's administration was resolutely opposed to all religion and refused. Drana died in Tirana, her burial place now unknown. Her daughter confessed her weariness and disappointment; but it was also within the scope of her iron personality to accept setbacks as the will of God.

Her other notable failure was in finding her telephone calls to the Rev Ian Paisley unreturned: all her powers of persuasion could not penetrate that hide.

Right until the end of her life, Mother Teresa showed a sense of care that was both particular and universal, tending to the victims of the explosion of Bhopal, and opening a home for Aids victims in Washington DC. As long as she was able to manage it, she continued doing the simple, practical tasks of her order - taking her turn cleaning out the lavatories, washing her own sari by hand.

She described herself thus: “By blood and origin I am all Albanian. My citizenship is Indian. I am a Catholic nun. As to my calling, I belong to the whole world. As to my heart, I belong entirely to the heart of Jesus.”

Mother Teresa continued her travels indefatigably until the end of her life, though she was not always met with undiluted admiration and faced some outspoken opposition to her position on abortion and divorce (which she described as against the moral law) from younger critics, notably in Edinburgh and Dublin. (Significantly, perhaps, she was rapturously received in Belfast when she appeared in the working-class Catholic area of the Ardoyne in June 1993 - perhaps because she had failed to establish her sisters in Northern Ireland previously.) Mother Teresa stood up to criticism, however, with the steely resistance which characterised her sense of purpose: she conceded nothing and never modified her approaches.

More than one observer compared her to Margaret Thatcher in her sense of purpose and determination; she also had that necessary quality of all leaders - she did not spend much time worrying what people thought of her. She certainly had her critics, who tended to increase in latter years. Germaine Greer called her "a religious imperialist" who had "denied choice to suffering women" by condemning contraception and abortion. A sensational television programme (and book) by the writer Christopher Hitchens, which went out on Channel 4 in November 1994, attacked her reputation and work ferociously, describing her as a "Catholic fundamentalist with a mission against abortion and some rather dodgy friends". More muted critics had expressed the view previously that Mother Teresa could help the poor of the world better by giving them condoms rather than charity, but in a sense, the critics missed the point: that was not what Mother Teresa was for. There are many well-funded agencies which distribute condoms: but there was only one Mother Teresa, a little nun who by sheer dint of personality and holiness caught the human imagination.

She professed no fear of dying - “Death is going home”, she said, as the end of her life approached - and yet she continued to rally to life's call over half a decade of failing health, and cheerfully accepted, even embraced, the assistance of modern medical care.