The ICC Women’s T20 World Cup 2020 is officially up and running as all the 10 skippers gathered for the captain’s media launch on Monday at the Taronga Zoo in Sydney, reports ICC

The 2020 edition of the Women’s T20 World Cup is set to be the most closely-fought yet, and the prize at the end could not have been greater.

A world record attendance for a women’s sport fixture could be set when the final is held on 8 March in Melbourne – International Women’s Day – with those at the helm desperate to take their country to the MCG.

Rounding off Group A are Bangladesh, keen to build on an improvement in the past few years which culminated in Salma Khatun’s side beating India in the Asia Cup. Salma also said that her side will take inspiration from the success of the Bangladesh U-19s' recent World Cup triumph.

She said: “The Asia Cup was a great experience, but the focus is now on the World Cup. We want to be focusing on New Zealand and Australia. Our U19 side won the World Cup recently and we are looking forward to getting started.”

As hosts and defending champions, Australia captain Meg Lanning knows expectation more than most but, with the chance to play in iconic stadia, she is keen for her team to enjoy and not worry about the experience.

“We’re looking forward to getting started, it’s great that we get to reach out to all our fans across the country and they’ll get the chance to see what will be an amazing tournament,” she said. “We want to enjoy the experience of playing in front of friends and family.

“It’s a once-in-a-career opportunity to play in a home World Cup, there is pressure and expectation in that but every team wants to win, as we do.”

Lanning’s side will face India in their tournament opener on 21 February, with India looking to build on the performances which saw them reach the ICC Women’s Cricket World Cup Final in 2017.

Harmanpreet Kaur will take the reins in Australia. “Our team is growing day by day, everyone is looking so positive,” she said. “It’s going to be very big if we win, I was very surprised at all the reaction from 2017.

“My parents didn’t tell me, they didn’t want us to feel the pressure. If we win, it’s going to be very big for us. We will try to give our best.”

Pakistan have failed to reach their full potential in ICC competitions, a setback captain Bismah Maroof believes could change this time around. 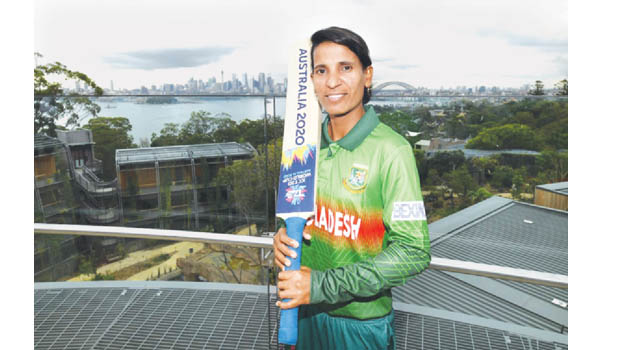 Bangladesh skipper Salma Khatun poses with the bat during a photo shoot in Sydney on Monday.     Photo: AFP

“It’s important for us to get the right mindset, we’re working on the mental side of our game and so we want to be in a good frame of mind ahead of the first game,” she said.

Group B features two previous Women’s T20 World Cup winning sides, one of whom is England – victors in the inaugural competition in 2009. Heather Knight wasn’t part of the squad then but led her side to Women’s Cricket World Cup glory in England back in 2017, noticing similarities between preparations for that competition and now.

“We had a great experience in 2017, which was unique in terms of expectation,” she said.

“You want to be tested at a World Cup, finding ways to improve and learn and the tri-series was brilliant for that – we’re now just ready to get going.”

The other former champions are West Indies, who prevailed in 2016 but missed out in their home tournament two years ago. Australia spoiled the party on that occasion but Stafanie Taylor insists revenge isn’t part of their pre-event psyche in 2020.

“We’re really trying to focus on our own game and playing our best cricket,” she said. “We’ve been playing indoors a lot because of the awful weather so we’re looking forward to getting going.”

Meanwhile, South Africa enter this World Cup as one of the underdogs – a tag that Dane van Niekerk feels suits the Proteas. And with Siya Kolisi leading the men’s rugby team to World Cup glory last year, the skipper doesn’t have far to look for inspiration.

She said: “Nelson Mandela said that sport can unite a nation and that’s what we as sportspeople do, we try and bring the people together. If we do something special such as Siya, it would be a dream come true and that’s what makes it special.”

Family is my priority: Imrul

‘If AB wanted to be here, he would be here’ - Ottis Gibson