Leaders of Bangladesh Hindu Buddhist Christian Unity Council on Saturday urged the government to set up a separate ministry for religious minorities in the country.

In this regard, a human chain and rally was held at Chowdhury More area in Bagerhat's Mongla upazila on Saturday 10 am, under the chairmanship of Mihir Kumar Bhandari, President of Mongla branch of Bangladesh Hindu Buddhist Christian Unity Council.

Speakers at the human chain said, “Religious minorities are being persecuted across the country. A class of miscreants is hurting religious sentiments and spreading rumours by hacking the IDs of minorities through social media. This is not desirable in secular Bangladesh. We have all made the country independent together and want to live in peace”. 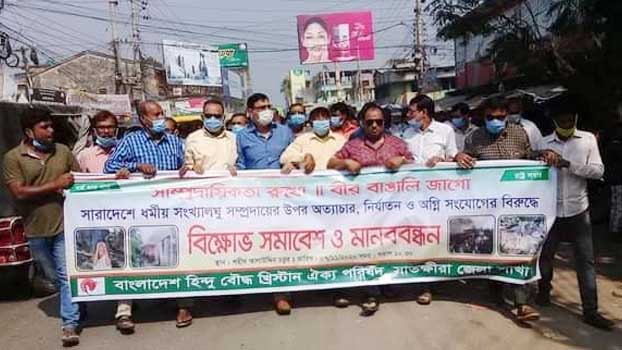 Satkhira branch of Bangladesh Hindu Buddhist Christian Unity Council brings out a rally in the district town on Saturday.

Meanwhile, a protest rally and human chain programme was held in Satkhira to protest against the persecution, torture and arson of religious minorities across the country.

Biswajit Sadhu, District president of the organization, presided over the protest rally and human chain while, Sudhanshu Shekhar Sarkar, Nityananda Amin, Bishwanath Ghosh and others spoke at the time.

The speakers said that numerous incidents of persecuting religious minorities were taking place across the country, but the government is indifferent.

The speakers called for an end to the persecution of religious minorities, including the formation of a minority commission and ministry.