Speakers at a launching ceremony of a Farmers’ Market on Friday (September 30) said that although farmers are one of the driving forces of the country, unfortunately fair price of their produce has not been ensured till now.

The launching ceremony of the area-based weekly Farmers’ Market was held in Ward No. 19 of Dhaka South City Corporation (DSCC). The weekly makeshift market was launched on Eskaton Garden Road next to Dhaka Ladies Club in the capital.

The second weekly market on Eskaton Garden Road will be held every Friday from 7:00am to 2:00pm. Ten safe farmers certified by the Department of Agricultural Extension (DAE) from Tentulljhora area in Savar, on the outskirts of the capital, will sell their vegetables and fruits in the market.

Speakers at the launching ceremony said that the area-based weekly ‘Farmers’ Market’ has been launched in order to end the absence of proper market management and to provide healthy and safe food for the city dwellers. This marketplace has also been launched to ensure the benefit of both the farmers and consumers at fair prices.

The Farmers’ Market was launched under the ‘Dhaka Food System Project’ of Food and Agriculture Organisation (FAO) of the United Nations (FAO). Work for a Better Bangladesh (WBB) Trust is implementing the project with the support of the Embassy of the Netherlands. The DSCC is providing support in Farmers’ Markets established in its area. 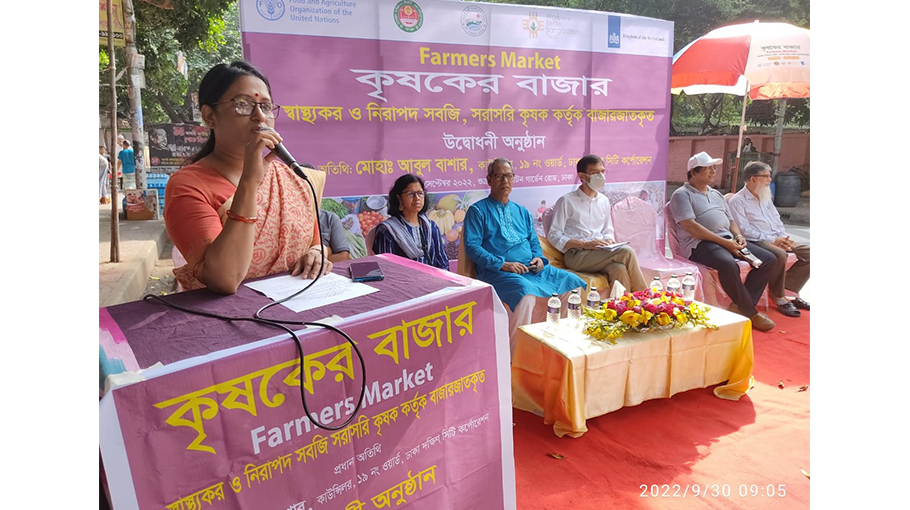 Mohammad Abul Bashar, councilor from Ward No. 19 of DSCC, formally inaugurated the second Farmers’ Market of DSCC area established in the area of his ward.

In his speech, Mohammad Abul Bashar said that initiative has been taken to address the challenge of safe food through farmers’ market activities. He assured that necessary security for the farmers of area-based weekly marketplace will be ensured from the office of the councilor.

Ruksana Islam Chameli said that if the marketplace is established on a larger scale, it is possible to ensure supply according to the needs of the local people.

Gaous Pearee of WBB Trust informed that seven farmers’ markets have already been established in Dhaka city to improve the quality of life of farmers and ensure safe and nutritious food for the local city dwellers. “We hope that this initiative will play a vital role in ensuring the development of farmers and consumers,” she said.

‘Teachers must be nurtured for their development’