So what do the leaks tell us then? In this post, we’re taking a look at all the rumored Galaxy S20, Galaxy S20 Plus, and Galaxy S20 Ultra specs, from horsepower to the camera experience and beyond. Once again, these are just based on rumors and leaks for now, so things might change when the phones are officially launched. What about the Galaxy S20e? The rumor mill is suggesting there won’t be a Galaxy S20e this year. That could be wrong, but we’re going to summarize things assuming that Samsung is moving on from the “e” branding within the Galaxy S line. 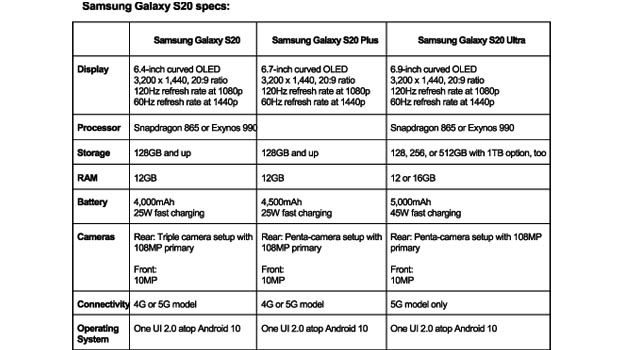 Power means nothing if endurance is short, but Samsung is apparently addressing this problem as well. We don’t know anything about the Galaxy S20 battery capacity, but the S20 Plus and S20 Ultra will apparently offer 4,500mAh and 5,000mAh packs respectively. That leads us to assume the S20 will feature a 4,000mAh battery, but that’s just speculation.

Renders show that the Galaxy S20 seems to deliver a triple rear camera shooter, while the S20 Plus and S20 Ultra seemingly offer a penta-lens camera setup. One prominent rumor is that all phones in the series will offer 48MP telephoto zoom cameras. We’ve also heard reports of the series offering 5x zoom capabilities, but it’s unclear if this feature applies to the S20 as well.

Selfie duties are reportedly handled by 10MP cameras, the same found on the Samsung Galaxy Note 10. You can even expect the same center-mounted punch-hole cutout as the Galaxy Note 10 series. Speaking of the front of the phones, it’s believed that we might be looking at 120Hz curved OLED screens with ultrasonic in-display fingerprint sensors.