Samira Makhmalbaf was born in Teheran, the daughter of veteran Iranian filmmaker Mohsen Makhmalbaf. As a child, she would join her father on his film sets and watch him edit afterward. Her first taste for cinema came at a tender age, when she played a role in her father Mohsen Makhmalbaf 's film ‘The Cyclist’ (1987). In pursuit of her dream the young Makhmalbaf left high school when she was 14 years old to study cinema in the Makhmalbaf Film House for five years. At the age of 20, she studied Psychology and Law at Roehampton University in London.

Makhmalbaf has been noted for her film style which portrays an “archaic oriental tradition of shadow theatre, which, though deceptively simple to the western eye, has a way of lingering like an unsolved enigma for ever after.”

At the age of 17, she directed her first feature titled ‘La Pomme’ (The Apple). Makhmalbaf’s ‘La Pomme’ touches on a theme that was a favourite of Enlightenment philosophers and physicians, from Rousseau to Philippe Pinel: the feral child. Through this movie she went on to become the youngest director in the world participating in the official section of the 1998 Cannes Film Festival. She was praised on different occasions by the legendary Jean-Luc Godard for her film. ‘The Apple’ was invited to more than 100 international film festivals from Buenos Aires to Thessaloniki, and was awarded the British Film Institute’s Sutherland Trophy and the FIPRESCI Prize at Locarno. She would go on become the youngest filmmaker be invited into Official Selection at Cannes, and the youngest jury member at Locarno in a period of two years, while going to the screen in more than 30 countries.

Her second feature, ‘Blackboards’ (2000), was similarly well-received by international critics, snaring the Grand Jury Prize at the American Film Institute Festival in Los Angeles that year, as well as the Jury Prize at Cannes, thus becoming the youngest recipient of a prize at Cannes. In 2000, she also served on the Jury at Venice's Mostra Internazionale d'Arte Cinematografica with the likes of Milos Forman and Claude Chabrol, while in 2001 she was a member of the Jury at Cannes.

Makhmalbaf lent her skills to the portmanteau film ‘11'09'01 – September 11’ (2002), and as a result shared the UNESCO award at the Venice Film Festival that year with Ken Loach, Alejandro González Iñárritu and Sean Penn, among others.

‘At Five in the Afternoon’ (2003), also co-written with her father, won Cannes' Jury Prize and the Prize of the Ecumenical Jury, receiving rave reviews from critics the world over. The following year she served on the Jury of the 54th Berlin International Film Festival. 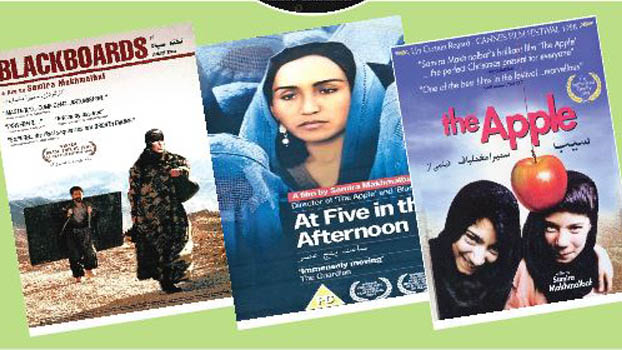 Samira Makhmalbaf has been a great activist for women's rights almost all her life.

One of the leading lights of the Iranian New Wave, Makhmalbaf has done more in her ten short years behind the camera than many could hope to achieve in an entire career. In 2003 Makhmalbaf was voted one of the world's 40 best directors by a panel of critics, a list she shared with such master craftsmen as Lars Von Trier, Gus Van Sant and Takeshi Kitano.