Over the decades people have become conscious of their rights and have become vocal for the essence of their existence. But righ

Martin Luther King, Jr., original name Michael King, Jr., (born January 15, 1929, Atlanta, Georgia, U.S.—died April 4, 1968, Memphis, Tennessee), Baptist minister and social activist who led the civil rights movement in the United States from the mid-1950s until his death by assassination in 1968. His leadership was fundamental to that movement’s success in ending the legal segregation of African Americans in the South and other parts of the United States. King rose to national prominence as head of the Southern Christian Leadership Conference, which promoted nonviolent tactics, such as the massive March on Washington (1963), to achieve civil rights. He was awarded the Nobel Peace Prize in 1964.

King came from a comfortable middle-class family steeped in the tradition of the Southern black ministry: both his father and maternal grandfather were Baptist preachers. His parents were college-educated, and King’s father had succeeded his father-in-law as pastor of the prestigious Ebenezer Baptist Church in Atlanta. The family lived on Auburn Avenue, otherwise known as “Sweet Auburn,” the bustling “black Wall Street,” home to some of the country’s largest and most prosperous black businesses and black churches in the years before the civil rights movement. Young Martin received a solid education and grew up in a loving extended family.

This secure upbringing, however, did not prevent King from experiencing the prejudices then common in the South. He never forgot the time when, at about age six, one of his white playmates announced that his parents would no longer allow him to play with King, because the children were now attending segregated schools. Dearest to King in these early years was his maternal grandmother, whose death in 1941 left him shaken and unstable. Upset because he had learned of her fatal heart attack while attending a parade without his parents’ permission, the 12-year-old King attempted suicide by jumping from a second-story window.

In 1944, at age 15, King entered Morehouse College in Atlanta under a special wartime program intended to boost enrollment by admitting promising high-school students like King. Before beginning college, however, King spent the summer on a tobacco farm in Connecticut; it was his first extended stay away from home and his first substantial experience of race relations outside the segregated South. He was shocked by how peacefully the races mixed in the North. “Negroes and whites go [to] the same church,” he noted in a letter to his parents. “I never [thought] that a person of my race could eat anywhere.” This summer experience in the North only deepened King’s growing hatred of racial segregation.

At Morehouse, King favoured studies in medicine and law, but these were eclipsed in his senior year by a decision to enter the ministry, as his father had urged. King’s mentor at Morehouse was the college president, Benjamin Mays, a social gospel activist whose rich oratory and progressive ideas had left an indelible imprint on King’s father. Committed to fighting racial inequality, Mays accused the African American community of complacency in the face of oppression, and he prodded the black church into social action by criticizing its emphasis on the hereafter instead of the here and now; it was a call to service that was not lost on the teenage King. He graduated from Morehouse in 1948. 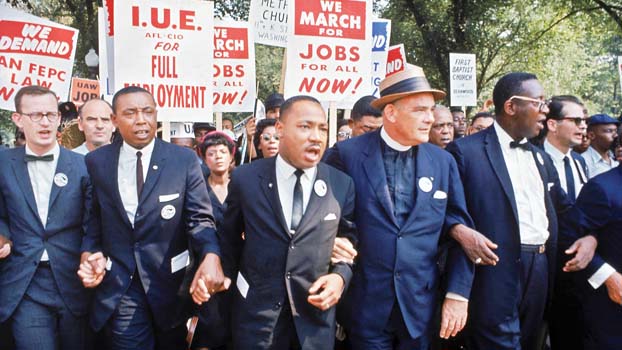 King spent the next three years at Crozer Theological Seminary in Chester, Pennsylvania, where he became acquainted with Mohandas Gandhi’s philosophy of nonviolence as well as with the thought of contemporary Protestant theologians. He earned a bachelor of divinity degree in 1951. Renowned for his oratorical skills, King was elected president of Crozer’s student body, which was composed almost exclusively of white students. As a professor at Crozer wrote in a letter of recommendation for King, “The fact that with our student body largely Southern in constitution a colored man should be elected to and be popular [in] such a position is in itself no mean recommendation.” From Crozer, King went to Boston University, where, in seeking a firm foundation for his own theological and ethical inclinations, he studied man’s relationship to God and received a doctorate (1955) for a dissertation titled “A Comparison of the Conceptions of God in the Thinking of Paul Tillich and Henry Nelson Wieman.”

While in Boston, King met Coretta Scott, a native Alabamian who was studying at the New England Conservatory of Music. They were married in 1953 and had four children. King had been pastor of the Dexter Avenue Baptist Church in Montgomery, Alabama, slightly more than a year when the city’s small group of civil rights advocates decided to contest racial segregation on that city’s public bus system following the incident on December 1, 1955, in which Rosa Parks, an African American woman, had refused to surrender her bus seat to a white passenger and as a consequence was arrested for violating the city’s segregation law. Activists formed the Montgomery Improvement Association to boycott the transit system and chose King as their leader. He had the advantage of being a young, well-trained man who was too new in town to have made enemies; he was generally respected, and it was thought that his family connections and professional standing would enable him to find another pastorate should the boycott fail.

In his first speech to the group as its president, King declared:

“We have no alternative but to protest. For many years we have shown an amazing patience. We have sometimes given our white brothers the feeling that we liked the way we were being treated. But we come here tonight to be saved from that patience that makes us patient with anything less than freedom and justice.”

In 1960 King and his family moved to his native city of Atlanta, where he became co-pastor with his father of the Ebenezer Baptist Church. At this post he devoted most of his time to the SCLC and the civil rights movement, declaring that the “psychological moment has come when a concentrated drive against injustice can bring great, tangible gains.” His thesis was soon tested as he agreed to support the sit-in demonstrations undertaken by local black college students. In late October he was arrested with 33 young people protesting segregation at the lunch counter in an Atlanta department store. Charges were dropped, but King was sentenced to Reidsville State Prison Farm on the pretext that he had violated his probation on a minor traffic offense committed several months earlier. The case assumed national proportions, with widespread concern over his safety, outrage at Georgia’s flouting of legal forms, and the failure of Pres. Dwight D. Eisenhower to intervene. King was released only upon the intercession of Democratic presidential candidate John F. Kennedy—an action so widely publicized that it was felt to have contributed substantially to Kennedy’s slender election victory eight days later.

In the years from 1960 to 1965, King’s influence reached its zenith. Handsome, eloquent, and doggedly determined, King quickly caught the attention of the news media, particularly of the producers of that budding medium of social change—television. He understood the power of television to nationalize and internationalize the struggle for civil rights, and his well-publicized tactics of active nonviolence (sit-ins, protest marches) aroused the devoted allegiance of many African Americans and liberal whites in all parts of the country, as well as support from the administrations of Presidents Kennedy and Lyndon B. Johnson. But there were also notable failures, as in Albany, Georgia (1961–62), when King and his colleagues failed to achieve their desegregation goals for public parks and other facilities.

Meanwhile, the strain and changing dynamics of the civil rights movement had taken a toll on King, especially in the final months of his life. “I’m frankly tired of marching. I’m tired of going to jail,” he admitted in 1968. “Living every day under the threat of death, I feel discouraged every now and then and feel my work’s in vain, but then the Holy Spirit revives my soul again.”

King’s plans for a Poor People’s March to Washington were interrupted in the spring of 1968 by a trip to Memphis, Tennessee, in support of a strike by that city’s sanitation workers. In the opinion of many of his followers and biographers, King seemed to sense his end was near. As King prophetically told a crowd at the Mason Temple Church in Memphis on April 3, the night before he died, “I’ve seen the promised land. I may not get there with you. But I want you to know tonight that we, as a people, will get to the promised land.” The next day, while standing on the second-story balcony of the Lorraine Motel, where he and his associates were staying, King was killed by a sniper’s bullet. The killing sparked riots and disturbances in over 100 cities across the country. On March 10, 1969, the accused assassin, a white man, James Earl Ray, pleaded guilty to the murder and was sentenced to 99 years in prison.

The Wizard of Menlo Park

The assassination of President Lincoln