I was recently fortunate to have a conversation with Shouvik Mukherjee who  is one of the finest musicians of the younger generations from India. He is at ease with the traditional classical as well as the new age music of today. His creative finesse is evident inHindustani Classical Music; while his predilection for auspiciously fusing cross-genre music into seamless tracks has been already acknowledged throughout India.

How did your musical journey start?

How did academic background help your musical thinking?

I was born and brought up in a musical family. My father was a sitarist and my mother is a very good Rabindra Sangeet vocalist. My elder brother, Sri Abhik Mukherjee is also a well-known Sitar player. Therefore, I was always surrounded by musical ambiance. Later on, after my schooling, I completed my higher degrees from RabindraBharati University, so that I can brush up my musical knowledge to the finest.

Share the journey of your band Rishop ‘Rishop’ was my first band and it will always remain close to my heart. The band was formed in 2008 and it was a purely instrumental band. There were seven members in the band. Rishop performed in many prestigious places and got appreciated. Our first album “Flame’ launched in 2009.

What is the present situation of contemporary musical education in South Asia?

I don’t have much knowledge about the situation of contemporary music of south Asia. While visiting some places in India and Bangladesh, I found Institutions organizations which is encouraging young talents to create good music. 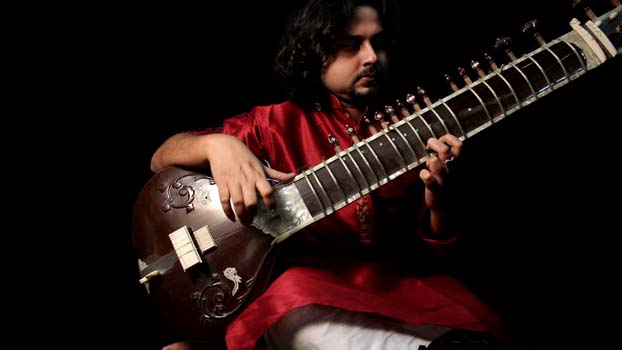 What steps can be taken to popularize classical music to a greater number of audiences?

Music is not a physical product with objectively measurable benefits. It is an experiential product and its perceived benefits are intensely personal and subjective. As a whole I would request to media to promote more programme on Classical music which will enrich our culture and for us it is our duty to preserve the heritage and carry away the Guru- Shishya parampara of Classical music for the future generations.

Amongst many achievements and awards, I can remember my first television programme telecasted on the “Tara Music” channel named, ‘Jalshaghor’.

I played in a special concert in Raj Bhavan (Governer’s Place) in Kolkata, in 2010.

Also I have played and worked with many eminent Musicians like Pt. Mallar Ghosh, Music Director Debojyoti Mishra, SouravMoni and so on. Performed in many prestigious places in India like Belur Math, Behela Classical Festival, Golpark Ramakrishna Mission, Rachi, Bangalore, Patna, Kappa T.V of Kerala and so on. In abroad I have performed in Indian Embassy of Berlin, Cologne, Hamburg,Dusseldorf, France, Switzerland, Belgium, Denmark , FABRIK, Hamburg-Altona, Indian Embassy-Den-Hague, Cultuurhuis Heerlen, Très-Sainte-TrinitéStrasbourg, India Week, Hamburg, Theater am , also Performed in “Fest in IndischenDorf”, Rathausplatz, Althütte, Germany and so on.

How your musical idols and gurus inspired you?

My Guru and my elder brother Abhik Mukherjee are my greatest inspirations. My guru Pt. Kushal Das helped me to enlighten my path and shunned the darkness which swayed my way through his impregnable knowledge and effort in the subject.

Any suggestion for the new classical learners?

Practice and dedication is the key to the success. Practice in a right way, follow your Guru whole heartedly and adopt the skill of listening good music will sharpen your musical skills.

How well do you know Switzerland?

Who had the right to declare independence?

Golden jubilee of our Independence Day