A Bengali has songs in the blood. Even if he cannot sing well, can appreciate and hum the tunes when in solitude. Music fills the air of Bengal. It is created when the ripe paddy sheaves sway in the breeze. It is heard when a thousand leaves of a banayan tree flutter in the air. It becomes discernible when a dingy makes its way through the monsoon water...or when doves call each other in the deep forest. Music becomes ethereal when rain drops fall on the river water in the monsoon seasons in Bengal.

Our baul songs and then jari, sari, bhatiyali and bhawaiya are our traditions. Lalon continues to dominate the spiritual aspects in songs. Rabindranath Tagore and Nazrul Islam introduced two different schools in the 19th and 20th centuries, both of which are immensely popular even today. We have to give credit to Dijendralal Roy, Atulprasad Sen, Rajanikanta Sen, Hason Raja, Radha Romon, Kangal Harinath, and Shah Abdul Karim for their contribution with some memorable songs.

Bangla songs heard in between our childhood and youth were the sweetest and soul-touching. My personal belief is most of the songs of yesteryears became timeless because of the exquisite tunes. Perhaps, that is why we remember and hum a tune even though we may not remember the words. But then again there are songs that will be remembered for their rich lyrics.

Why do we remember those songs even today and love to play them again and again? May be because many of those were the songs of the carefree childhood days when living in a joint family was fun. When someone in the family sang in the evening, “Ei phuler deshe kon bhromor eshe, ki kotha niey je kanakani kore jani ta jani ta jani.”

Those were the days when everything in nature looked beautiful and serene. As we grew older and went to higher classes in school we began to discover new emotions in our hearts. With typical adolescence shyness and naivety we felt restless and wondered why we felt the way we did. We hardly could realize that romance was tiptoeing into our lives. May be that is why our hearts fluttered at the very sight of a skirt, or a beautiful face with two long braids swaying on the two sides. A quick glance or a fleeting smile would simply make us forget the entire world around us and we would croon out, “Janina kokhon tumi amar chokhe shoponero maya diley polokey hridoy niley, amije dik haralam tomar moner othoi jheeley…” We would put the face of the person with two braids to the lilting song, “Shopno bhora din guli mor jai bheshe jai bheshe, jetha chaoar sheshe modhur paoa shei deshe, shei deshe....” and dream that she was singing for us. For the first time we discovered love and fell so abruptly, almost with every girl with braids or a pony tail, and suffered in stifling loneliness as there was no way to communicate. Those were the days of segregation and we sang, “Ei kuley ami ar oi kuley tumi, majh khaney nodi oi boey choley jai…” 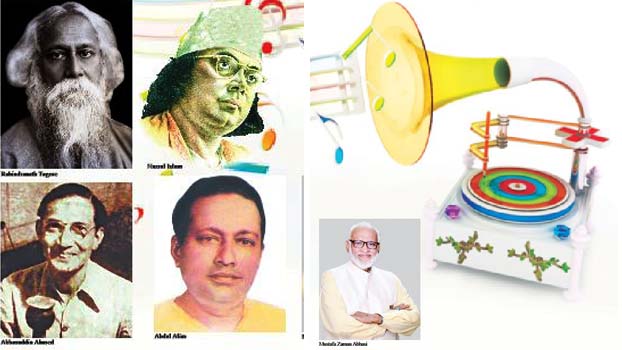 The longing to have a glimpse of the person of the dream often became unbearable for the young heart, especially on rain-drenched nights, so it found solace in the song, “O bondhu, ei bokul jhora, srabon ratey, bolbo bhabi karey, je kothati chokher joley bhashe barey barey…”  If the intensity of the storm in our minds matched that of the one raging outside, we would sing, “Jhor uthechhe baul batash ajke holo shathi shatmoholar shopono purir nibhilo hajaro bati…”

The world was not appreciative of the craving of the young hearts.  The young men had to do other earthly things like going to school, preparing for exams and so on. No more going to the playground and waiting for the one with the pony tail to appear in the distance out on a walk. Cruel world often separated us from our loved ones, and we sang, “Tummi aj koto durey…tumi aj koto durey, akhir araley choley gechho tobu roechho hridoyo jurey…”   Or “Ami shagorero bela, tumi duronto dheu, barey barey shudhu aghat koria jao, dhora dibey boley asha korey roi tobu dhora nahi dao…”

Sometimes we had to move on in life, leaving behind our short-lived romance, and the memory remained enshrined in our minds forever to be evoked occasionally by a song we heard those days, "Shoronero baluka belai choron chinho aki tumi choley gachho durey bohu durey, shudhu porichoi tuku rakhi …”

As the train pulled out of the small, sleepy station, the young man would look at the town for the last time where his loved one lived. He would hear her name in the staccato sound made by the under carriage as the train sped up. Looking out at the moving world outside he would hum, “Aj dujonar duti poth ogo duti dikey gachhe bekey…

The train would finally stop at a new station in life. Far away from the girl with the cherubic face, melancholy would grip the young man's world and he would sing, “Muchey jaoa din guli amai je pichhu dakey, smriti jeno amar e hridoye bedonar rongey  rongey chhobi akey…”