Rakesh Chaurasia is one of the topnotch bamboo flute player in the world. He is the nephew and child prodigy of flute maestro Pandit Hariprasad Chaurasia and is one of his most accomplished disciples. Incorporating the tradition of his renowned uncle and infusing his personal style, he has evolved a style that maintains the identity and purity of the flute while blending its sound with other instruments.

His impeccable performance and magnificent style of playing eastern classical music have pleased people all over the world. He has achieved many awards such as Indian Music Academy Award, presented by Dr A P J Abdul Kalam in 2007, the Aditya Birla Kalakiran Puraskar in 2008, the Guru Shishya Award in 2011, IWAP-Pandit Jasraj Sangeet Ratna Award and the Pannalal Ghosh Puraskar in 2013.

Tell us about how and when you started your journey in the world of music with flute?

I have started playing flute when my age was four and a half. My uncle used to play flute all day and my upbringing was with him. In fact I call him Bapuji (father) and I used to call my father uncle when I was young. So when my uncle asked me what I want to do, I told him I want to play what you play. Then he gave me a small flute and from that time I started making melody.

What or who is your biggest inspiration to do music?

My uncle is my biggest inspiration. I have never seen Krishna so my uncle is Krishna for me. Everyone inspires me, because if you keep taking from the flutist, you will just get to learn the phrases the flutists play but if you take from every place then you will learn phrases that are being played by other instruments. I listen to Ravishankar Ji and Ali Akbar Khan Ji a lot because they also belong to my gharana which is Maihar gharana. This gharana was founded by Baba Allauddin Khan who was from Bangladesh.

Other than eastern classical music, do you listen to other music?

Tell us about few of your remarkable works in Bollywood?

I have played in many films for example the song ‘Ye Hosla’ from the movie ‘Dor’. A funny fact is that this song is used as background music in many shows while there is sad moment going on. But I was not even sad when I wrote it. Other than that I have played in ‘Umrao Jaan,’ ‘Bajirao Mastani’, and recently I have played in ‘Padmavat’, and I have I have also played with R D Varman and Lakshmi Kanth.

You must have performed all over the world. Tell us about your experiences of playing eastern classical in the western world?

I have played all over United States. In USA there is a huge Indian crowed already, and there are foreigners as well. I have also played in all the major places and in many big music festivals in Europe. I like playing more in Europe because of their rich culture and music. I got to learn a lot from them. And there are lot of people and visitors who come to Europe so I got to represent my music to people from many other places. And they like to explore other music and they are very welcoming towards what is good. 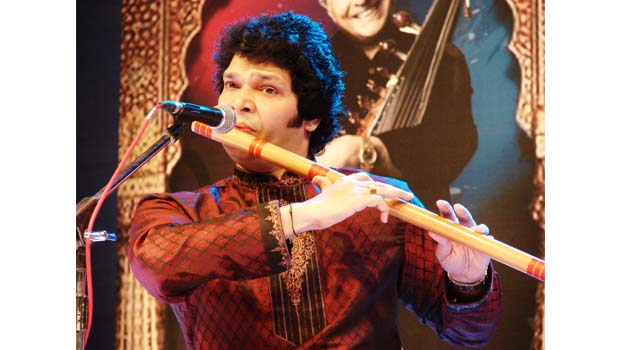 Have you ever felt nervous or shaky?

Yes, all the time. We may not show it but we do get nervous. Music is subjective and you can’t get 100 out of 100; eastern classical music totally depends on improvisation, mood and time. So you can’t have a perfect performance even if you try.

Do you still feel nervous while playing in front of your Guru who is your uncle?

Yes, all the time. I can perform in front anyone with more comfort than him. And it happened a few times when he was the chief guest at concerts where I am supposed to play. I thought to myself, “Why on earth does he have to be among so many people?” He is like Krishna or a god to me from my childhood. I can’t help but feel nervous in front of him.

How do you feel about playing in Bangladesh?

I felt very excited. I always wanted to see the crowd here because I have always heard about the classical festival in Bangladesh. I was taken aback when I saw all the people who came to the concert and waited all night and listened to our music patiently with love. It was amazing.

What message would you like to give to the people about music?

I feel that everyone should listen to music. If music is not present in someone’s life then their life is not complete. Something remains missing. We have a long connection with music. If you observe deeply any sort of party, festival, carnival or functions is incomplete without music. There is almost always music playing in the background. We are always linked with some sort of rhythm even our heart beat.