‘Save wildlife to save ecosystem’

Wildlife experts and officials of the Forest Department stressed the need for protecting wildlife in the country to ensure a healthy ecosystem.

At a function, the experts said that the Forest Department and the Wildlife Crime Control Unit (WCCU) under the department are working sincerely to curb the illegal wildlife trade and other wildlife-related crimes in the country.

They said that significant progress has been made in Bangladesh since the inception of the WCCU and the enactment of the ‘Wildlife (Conservation and Security) Act, 2012’. 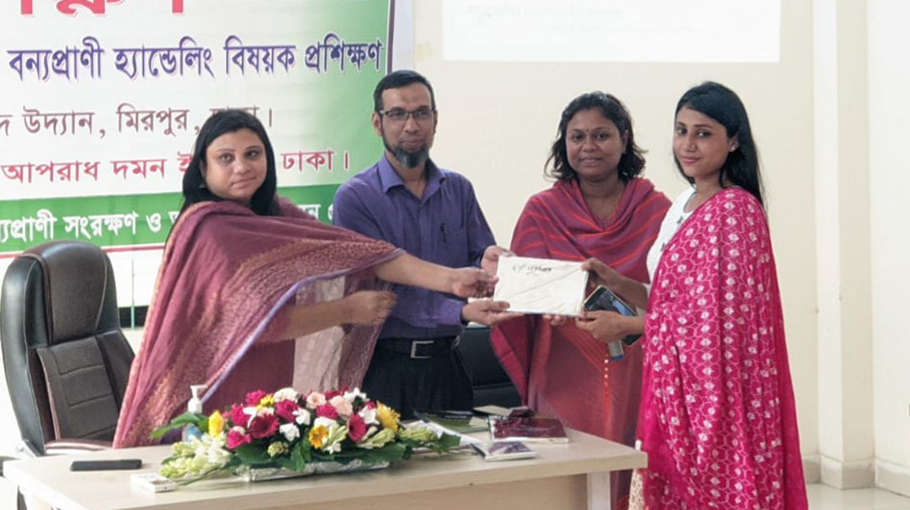 WCCU Director A.S.M Jahir Uddin Akon and Wildlife Inspector Nargis Sultana are seen handing over prize to a participant in the concluding ceremony of a 10-day training workshop on ‘Wildlife Crime Prevention and Wildlife Handling’ at the Botanical Garden in the capital, organized by the WCCU.

The WCCU along with other departments concerned is working seriously to detect, identify and prosecute wildlife crimes, they added.

Officials of the WCCU called upon the people, particularly the environmental organizations and the volunteers dedicated to wildlife conservation, to work for curbing illegal wildlife trade and other crimes related to the wildlife as per the 2012 law.

The volunteers on wildlife were especially urged to play a vital role in preventing and stopping the sale of birds and other wild animals which are sold using online media.

The WCCU officials said these and made the call at the concluding ceremony of a 10-day training workshop titled, ‘Wildlife Crime Prevention and Wildlife Handling’. The training, which began on May 9 with the participation of volunteers dedicated to wildlife conservation, ended on Wednesday (May 18). 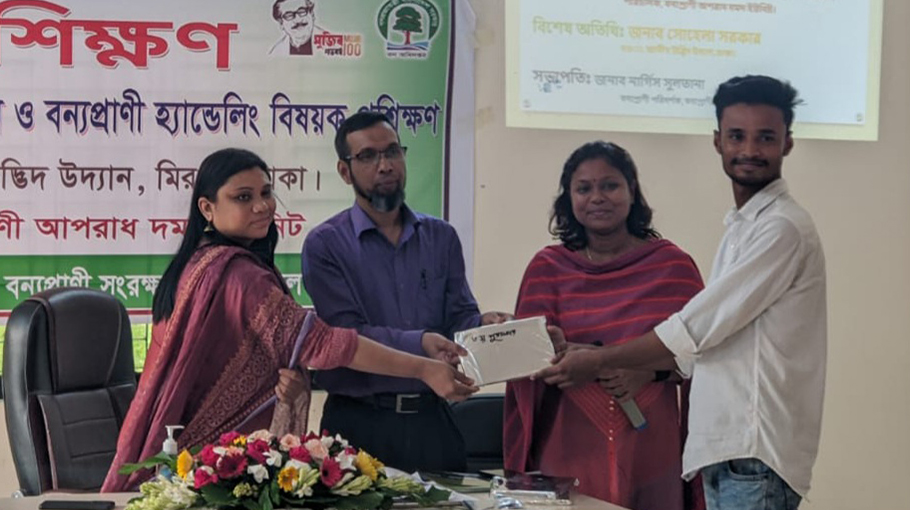 A participant is seen receiving prize from WCCU Director A.S.M Jahir Uddin Akon and Wildlife Inspector Nargis Sultana following a 10-day training workshop on ‘Wildlife Crime Prevention and Wildlife Handling’ held at the Botanical Garden in the capital, organized by the WCCU.

Wildlife and Biodiversity Conservation officers of Forrest Department Rathindra Kumar Biswas and Shakila Nargis, Wildlife Inspector at WCCU Nargis Sultana and some other officials of Forest Department and experts on wildlife also attended classes in the training workshop and spoke in various sessions.

The forest officials and wildlife experts said that wildlife smuggling is going on globally and it is a heinous crime. Some people from Bangladesh are involved with the international gang. The WCCU and the Forest Department should seriously work against them.

They said that human life relies on agricultural crops and wildlife plays a vital role in the growth of the crops. Crop growth will be significantly affected if the wild animals are reduced. So, the wildlife must be saved in the country and the world, they added.