Jaishankar says the comfort level in the relations is very high

Indian External Affairs Minister S. Jaishankar on Thursday said that the “comfort levels” of Dhaka, Delhi relations were so high that there was no issue that both sides cannot discuss and resolve through amicable dialogue.

“The significance of our ties with Bangladesh lies in its centrality for our ‘Neighbourhood First' and its growing relevance for our ’Act East’ Policy. We see Bangladesh as a key neighbour and a valued partner not only in South Asia but also in the broader Indo-Pacific region. Every outcome and achievement in our relationship resonates through the region. It is no secret that we cite it to others as an example for emulation,” he said after the bilateral meeting with his counterpart Dr AK Abdul Momen at the state guesthouse Padma.

“This is why we are working to expand our partnership in all dimensions, ranging from security, trade, transport and connectivity, culture, people to people ties, to energy, joint development of our shared resources and defence ties,” he said at the joint briefing.

“Our comfort levels are so high now that we have shown that there is no issue that we cannot discuss and resolve through amicable dialogue.”

Preparation for the visit of Prime Minister Narendra Modi to Bangladesh on March 26 and 27 has been a “key element” of their discussion.

But, still they discussed a wide range of ongoing “bilateral issues as well as bilateral interests that we can take forward in the days ahead,” Dr Momen said.

“We focused on possible ways to materialise our commitments and how to prioritise and accommodate each other’s priorities in a mutually beneficial manner. Covid cooperation, connectivity, trade, water, security, border and lines of credit are some of the areas we discussed,” he said. 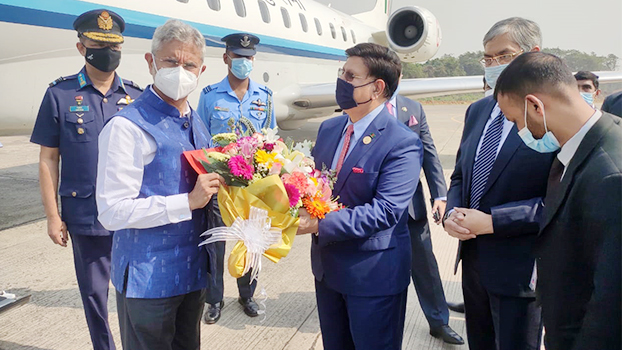 It’ll be a memorable visit

Jaishankar said they were working to prepare for the planned visit of Prime Minister Modi.

“It will be a very memorable visit: the Prime Minister‘s first travel outside India since the Coronavirus pandemic as well as his second as PM to Bangladesh. We know that this is a very special year, when both countries mark the Mujib Barsho, 50 years of Bangladesh‘s Liberation and 50 years of our bilateral relations,” he said.

“This truly highlights the importance we attach to these three anniversaries, as well as the enormous regard we have for Prime Minister Sheikh Hasina and Bangladesh. Our relations transcend even strategic partnerships, and I believe our bonding is central to the realization of the dream of a peaceful, prosperous and progressive South Asia.

“It is in pursuit of this vision that both sides have made remarkable progress in this relationship, especially since Prime Minister Narendra Modi‘s assumption of office in May 2014,” he said.

Ties in the time of pandemic

“It is a matter of satisfaction that despite the Covid pandemic, our interactions and consultations continued unabated,” he said.

“We have done Virtual Summit in December, Joint Consultative Commission in September, meetings of Foreign Secretaries, Power Secretaries and Home Secretaries, Police Chiefs, BSF- BGB and defence visits. Our Commerce, Water Resources and Shipping Secretaries are to meet soon. This itself shows the commitment of both sides.”

“Even the pandemic has provided an opportunity to reaffirm our friendship,” he said.

“Bangladesh is the largest recipient of made in India vaccines. Also among the friendships our largest gift of vaccines (2million) is also appropriately to this country. Our recent activities go beyond consultations and gestures, however important they may be. We have made practical progress on the ground.”

Conducting trial run of container cargo through Chattogram Port to Agartala, adding two new Protocol routes to inland waterways connecting Tripura to your national waterways, handing over 10 BG locomotives, commencing movement of container and parcel trains and forming a JV in the energy sector are some recent examples.

‘No crime, no death strategy’

Despite such engagements between the countries, border death remained a big question in Bangladesh.

Both foreign ministers said they had discussed the issue during the meeting.

Jaishankar said many of those deaths take place deep inside the Indian territory.

“So we discussed it. We discussed as neighbour and friend should,” he said, adding that every death is “regrettable”. But, during the meeting they also asked to ask themselves what is the problem? 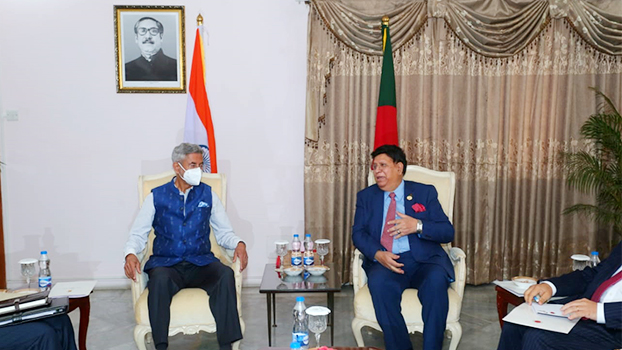 On the Teesta water sharing issue, Jaishankar said all know the position of India and that position has not changed.

During the last virtual summit in December between Modi and Sheikh Hasina, both sides highlighted the need for early signing of an interim agreement for sharing of the Teesta waters, as agreed upon by both the governments in 2011.

Modi reiterated India’s sincere commitment and continued efforts of the government of India in that regard. The two leaders also underscored the need for early conclusion of Framework of Interim Agreement on sharing of waters of six joint rivers, namely, Manu, Muhuri, Khowai, Gumti, Dharla and Dudhkumar.

Admiration for graduation from LDC

The external affairs minister also admired Bangladesh and Prime Minister Sheikh Hasina for the country’s eligibility to graduate from the LDC status.

“I also express our admiration and pride, as your closest neighbour and friend, at Bangladesh‘s expected graduation from LDC status: it is a tribute to your miraculous socio-economic progress, and the statesmanship of Prime Minister Sheikh Hasina,” Jaishankar said.

“May all your dreams come true and I can assure you that India will always be there as a reliable friend. Your marching contingent at our Republic Day Parade this January 26th may be a reaffirmation of our shared history. But it is also an expression for deep solidarity that will always guide our relationship,” he assured.

Connectivity major focus in next 20 years

Jaishankar said connectivity would be the key focus between India-Bangladesh for the next 20 years.

“Fifty years (of Indian-Bangladesh bilateral relations) are over, think for, no not fifty years think next twenty years.

“I would say most of all let us look at connectivity . I would pick connectivity as a big goal (for our relationship)."

He said they also talked about involving a third country, preferably Japan, to be a major stakeholder in the bilateral engagement in terms of connectivity as both Dhaka and New Delhi were having “very good” relations with Tokyo.

“Japan is involved (as well) in connectivity projects in the Bay of Bengal (region),” he said.

“I can tell you the whole geo-economics of the region will change, the Bay of Bengal will look very different.”